The Town of Mansfield was formed from Little Valley as Cecilius in 1830.  In 1831
the name was changed, following the suggestion of an early English settler, to
Mansfield in honor of the Earl of Mansfield, an English nobleman of the 18th
Century.

In 1818, the first settlers found indications of a much earlier inhabitation,
when trees that were felled revealed marks similar to those made by an axe blade
or perhaps a maple syrup tap.  In one instance, they were found inside 125 annual
growth rings, which would have placed them as being made around 1690 - 1700.  Folklore
attributes these marks to a party of French-Canadians who penetrated what
was then wilderness on their jounrey to the Ohio River.

Irregular ranges of hills and narrow valleys form the surface of the Town.  The
soil is productive and adapted to grazing, stock raising and dairying.  Several
cheese factories, such as Sackett & Coe, were established throughout the Town.

The first purchase of land from the Holland Land Company occured in 1818.  The
first tavern was opened by Nathaniel Fish in the southeast part (Fish Hill area)
of the Town in 1819.  The one and only grist mill was constructed in 1830, as was
a fulling and cloth dressing mill.

The first highway within the Town generally followed the route of the current
County Road 13.  The New York, Lake Erie and Western Railroad, which crosses the
southwest corner of the Town, was completed in 1850s.

"Black salts" were the chief revenue generator of the early settlements, not only
in Mansfield, but all of Cattaraugus County.  The closest mills, in the 1830's,
were at Gowanda and Springville. 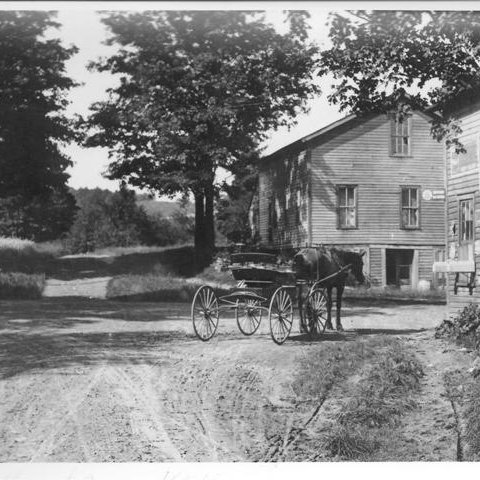