Town of Allegany- Largest Town in Cattaraugus - from the Cattaraugus County History 1808-1995/96 book
- photo is of Ward's Hotel, Allegany, NY

Allegany, containing 46,607 acres, is the largest town in area in Cattaraugus County.  On April 18, 1831, the Town of Burton, which included the present Towns of Allegany and Humphrey, was formed from Great Valley.  The area of current day Humphrey was annexed from Burton in 1836.  Town of Burton was renamed Town of Allegany on March 28, 1851, and includes part of the Allegany Indian Reservation.

Allegany is noted for its high hills and broad lowlands.  The main water course, flowing west through the central part of the Town is the Allegany River.  Due to the area's dense forest, and the Allegany River offering cheap transport for timber to market, numerous saw and shingle mills were erected within the Town.  When the pine/hemlock forests had been nearly exhausted, focus was given to farming.  Although drilling for oil began in 1875 near the Village, the first successful strike was not until 1877.

The hamlet of Knapp Creek, situated in the southern part of the Town, owes its existence to the oil industry.  A post office was established in this Hamlet in the late 1870's.  Today, working oil wells can be still seen along the highway.

Building of the railroads brought numerous Irish Catholics to the Allegany area.  Nicholas Devereux owned a large tract of land, which he offered to Irish Catholic railroad laborers for home settlements.  Mr. Devereux had visions of a "Dream City" to be called Allegany City which was never realized.  Being a zelous Catholic, interested in the spiritual of these settlers, Mr. Devereux began endeavors to bring missionaries of the Order of St. Francis to the area.  Three priests and one lay brother of the Order of St. Francis were sent to Western New York.  Franiciscan Father Pamfilio settled in Allegany on a parcel of land bequested by Mr. Devereux where St. Bonaventure was opened in 1859.  St. Bonaventure University is an independent co educational institution offering undergraduate programs and masters and doctor of philosophy degrees.

From the early to mid 1800's, mail was carried by horseback and stage from Buffalo to Olean on a road running through Springville, over Chapel Hill, down Five Mile Creek to Olean.  This route has been described as "one of the most useful and stirring thoroughfares in Western New York".  In 1852, the Buffalo to Olean route was discounted with the coming of the Erie Railroad.  At this point in history, Five Mile Run was the leading community in the Town of Allegany.  The present Village of Allegany was wilderness when its first settler arrived in 1820.

Allegany Village, incorporated in 1905, contains 433 acres and is situated in the central part of the Town.  In the late 1800's, a street railroad connected the Village to the City of Olean.  leather tanning was established in the Village in the mid 1800's.

Rock City, in the Southeast part of the Town, is the "world's largest" upheaval of quartz conglomerate sand rock.  Sometimes called the 8th Wonder of the World, this area of gigantic rocks was once a prehistoric ocean floor.  These towering rocks, with altitudes of 2,300 feet, also served as an Indian signaling and fortress.

Over the years, as with any community, both the Town and Village of Allegany have experienced change.  Aside from outdoor adventure (i.e. snowtubing, golf), motels, specialty/retail shops, a farm market, fine dingin can be yours in Allegany.  The newly combined Allegany-Limestone Central School and St. Bonaventure University, founded by the Order of St. Francis, both provide quality education.

With the expansion of the Cattaraugus Economic Development Zone (EDZ) and proximity to the City of Olean, the Town and Village of Allegany will continue to see beneficial changes in economic and social development.

Along with business and cultural transformation, both the Town and Village have experienced changes in land use and land ownership. 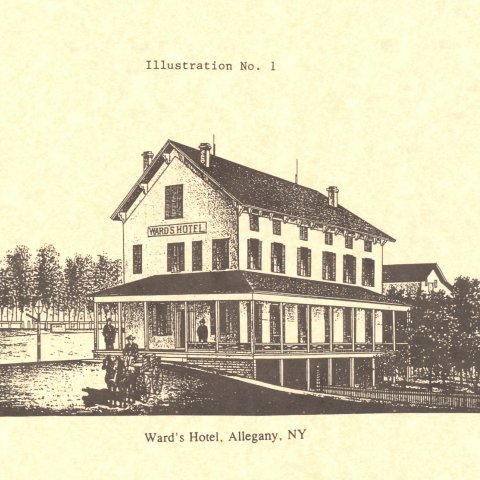