The movie industry’s transition from analog projectors to digital has been a death blow for many drive-in theaters, barely hanging on amid competition from corporate multiplexes and home theater systems. The expensive update has proven too much for many theater owners scraping by on razor-thin admissions margins and meager concessions sales.

Drive-in theaters once numbered in the thousands. Today, there are fewer than 400 of them left across the country. In fact, three theaters in New York State went dark last summer: the Greenville Drive-In in the Catskills, the West Rome Drive-In in Oneida County and the Fair Oaks Drive-In in the Hudson Valley.

The Delevan Drive-In, was previously known as the Loomis Delevan Drive In, and now being called Delevan Twin Drive In.  Under a new owner, Dr. Michael DiBella this Drive-In has had many owners since it's opening date in September 1959.  Thankfully, though each time it goes up for sale, someone pulls through to have it remain open.  With two screens, a concession stand, and two movies showing on each screen each night it is open. 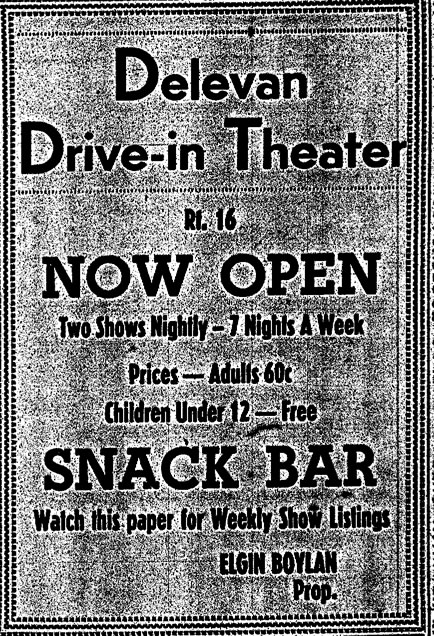 The first photo is an ad that showed the Delevan Drive-In Theater was now open!  From the Arcade Herald on September, 24 1959.

The second photo is an ad displaying  the Grand Opening and what movies were going to playing at the Portville Drive In.  From the Olean Times Herald on July 6, 1972.

Portions of this are from The Buffalo News, by Samantha Christmann, April 21, 2015, the Portville Drive In's website and http://www.newyorkdriveins.com.