The Town of Leon was erected from Conewango in 1832, and derived its name, following the suggestion of an early settler, from an ancient kingdom of Leon, Spain.

Many parts of the Town exhibit moderate hills, with portions of the Town level
and marshy.  The main waterways of the Town are Conewango Creek and Mud Creek.
Mud Creek, formerly Butternut Creek because of the large number of buttermilk
trees that lined this waterway, was once the site of several saw mills, the 1st
in 1826.

As a point of interest, generally land was monetarily purchased from the Holland
Land Company.  However, in some cases the land was bartered.  Such was the case
of Edmund Dugley who wanted to purchase some land in Leon.  An agent of the
Holland Land Company, learning that Mr. Dudley had a barrel of whiskey in his
possessions, sold the land for half a barrel of whiskey.

Riga Road, was named by the people who settled there who came from Riga, in
Monroe County, and is one of the oldest local roads in the Town.  When the
Jamestown Road opened, that became the main highway.  Leon had no railroads
within its bounds.

The hamlet of Leon Mills, earlier known as "The Hollow", and the first hamlet in
the Town, in the 1830's appeared to be a place of importance with the establishing
of a grist mill (1830), a distillery, a saw mill, an ashery, a hotel, a wool carding
& cloth-dressing factory, a tavern (1830), a store (1827), a post office
(1835), and several shops.  This hamlet's importance was short lived, with attention
being diverted to the hamlet of Leon.

In June of 1841, one of the most dastardly crimes ever committed in Cattaraugus
County occurred in Leon, when Mr. & Mrs. Richard Brown were murdered during a
robbery of $40.  The couple, only 3 weeks married, lived near Leon Centre.  The
murderer, a man named Bouhall, was one of the most active persons in attempting
to solve the crime.  After several months of investigation, Bouhall himself was
arrested.  Following several unsuccessful attempts to escape, he confessed to
the crime and hung himself in his jail cell.

Unique to Cattaraugus County is an Amish Colony, located in the western part of
the County, in the Conewango Valley area.  Purchasing unpretentious homes, and
arriving here from Ohio, the Amish people first settled in Cattaraugus County in
1949 in the Town of Leon.  Since they feel that owning and using modern tools and
appliances is a sin, any appliances that houses often contain, such as bathroom
facilities, running water, electricity, and telephone, had to be removed prior to
their occupancy.  Most of the Amish are farmers, employing farming methods, and
tools of an earlier time (i.e. piling hay in haycocks in the field, grain setup
in sheaves, corn on the stock hauled to the barn and husked by hand) Many of
the Amish have an extra business connected with the farm, such as sawmills,
harness and shoe repair shops, blacksmith shops and carpentry shops.  The products
of their labor are sold to the general public as well as to other Amish
families.  No business is conducted by the Amish community on Sundays. 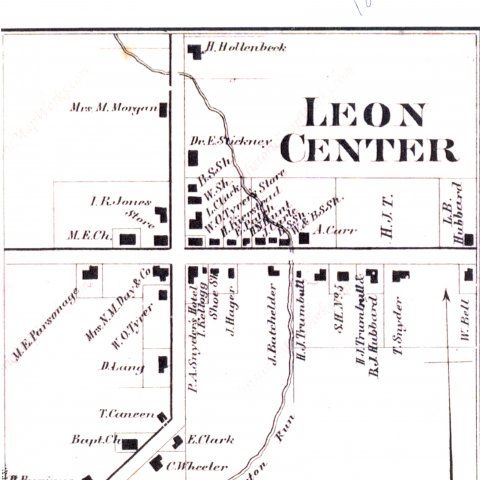